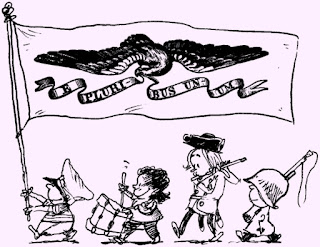 It's time for America to get very serious about its political process, so let's discuss this problem [Politics] before it gets too ugly to handle. The time has come for a real political third party to come forward. Enough of the psyched out belief that a third party system will split our political system into fragments, although that may be true to a point, but only a brief truth until the third party solidifies itself.

There has to be a washout of the current political system in America with correlating reconstruction of what the real American people want to have as a system of representation. There has to be cancellation of "Rogue & Thugs Politics" in America! No more access given to non-citizens, illegal aliens and third world dictators to dictate the laws and policies of this land. No more foreign dignitaries being allowed access to our government branches to discuss American citizen's voting choice of law and policies. No more politicians urinating on the average real American to quench our thirst for responsible and accountable government. No more infinite partisan contentment of holding power. No more political free rides to satisfy the addiction of political prosperity and greed. It all must come to an end ASAP [as soon as possibe].

What have you done to yourself America?
There are three types of Americans; the bad, the ugly and the third American. So far only the bad and the ugly have shown their face through out recent political history in this country. Now it’s time for the third American [common sense people of America] to take control of what is left of this government. The question brought forth is; what has allowed the dismal collection of government leaders to rise in prominence and over-power the people of the United States of America? The answer is self revealing when America looks in the mirror. Today we have the dumbest generation of citizenship that has ever existed in America. Liberal social engineering has developed a mind set that forces the belief that everyone has to have a college degree to function in this society. How in the hell did this ideology become America's foundation? America was not built on the minds of academic elitist. Has anyone ever thought of the Americans of the past who created and made this country into a great nation did not have a college degree. One may argue that times have changed and the world is more advanced than in the times of the formation of this country and a college education is needed. This could serve as a patrician point to promote if everyone were just another socially engineered clone, but we haven't reached that final point of social design.

Creating Great Americans for Today!
This country was not built by "smart ass" academic elites; neither can this country be sustained by the same. Holding a college degree did not build this nation and surely holding a college degree will not maintain the foundation of this nation, that precious responsibility can only be performed by real Americans. Did Harriet Tubman have a college degree? No! But yet after emancipation Tubman served in the Union Army as a Spy, a Scout, and a Nurse. She was the only woman in American military history to plan and execute an armed expedition against enemy forces. Did Benjamin Franklin have a college degree? No! But he was a Printer and Publisher, Author, Scientist and Inventor, Diplomat and Signer of the Declaration of Independence. Don't get me wrong, having a college degree can be beneficial within an academic realm, but real life is not centered on academics. Did George Washington Carver have a college degree? Yes! He obtained a Bachelors and Masters from Iowa State University. Professor Carver was a celebrated brilliant Botanist and Inventor. During World War II Carver devised 500 dyes to replace those dyes no longer available from Europe. So you see, it takes all types of brilliant minds to create a strong and productive society, whether college educated or not.

Update for a Completely Dysfunctional Government:
Let's get straight to the point; since the Democrat Party has failed miserably in leading this nation, it was the hope of real Americans for the Republican Party to hear the frustrating calls of the people. The people are calling for some leaders to take a firm stand on the principles and moral values which have held this country together. The people are calling for some leaders to not abandon or compromise the same. The leadership dilemma that persists for America has left a void in public trust of government. Therefore the residue that remains of the public trust has shifted in America to form a conservative group of people who consist of conservative democrats, conservative republicans, conservative independents and conservative libertarians. This special populous of conservative voters have always been in the background of the current political parties holding this country together. If it were not for the conservative populous surely the vengeful and treacherous partisan politics would have completely dismantled America by now. It is true that we are on the verge of dismantling right now, but by the grace of God it has not completely transpired. So, with all said I admonish you to give very close attention to the venomous verbiage that continue to spew out of the partisan sects of the main stream media, the goofy administration and the ignorant political parties to see if there is any type of unity available between the two historical political parties of America. This is the main reason for a third party to formulate as soon as possible before this nation destroys itself. If this nation can flip from a capitalistic society over night to a socialistic society, then surely a "Conservative Party" can be inducted into the American landscape of governing this country; not govern the people. The people should be governing themselves and not the government governing the people. That's why we are currently in a demise of retarded social operation today because of government intervention in our daily living. The government is governing the people instead of governing the government.

The Dionysius Disaster!
The best way to strip and destroy any nation of is power and wealth is by implementing guidelines and policies that weaken its populous. A guaranteed way of doing that is by government instituting political correctness into a nation's academics, government, science and media. Political correctness has destroyed nations in the past and it is destroying America today. In order to eliminate our current "Dionysius Disaster" in America please realize that action should be taken today to ensure a stable America tomorrow. We can correct this dilemma if we regroup as one people again and form a third party to help govern this nation. Remember, united we stand, divided we fall. We've already fallen, so let's regroup and stand up for America.
Posted by Dr Clayborn at Saturday, February 05, 2011 0 comments