American Genetics Under a Social Microscope 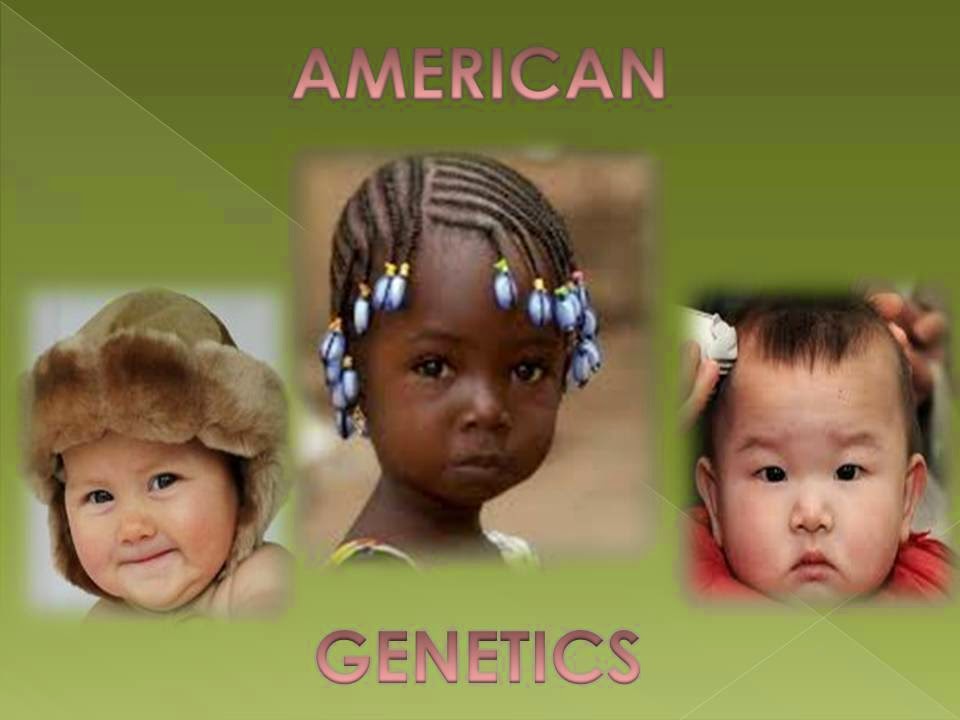 AMERICAN GENETICS [under a social microscope]

The United States of America has been under the spell of liberal race baiting for far too long.   America has grown cold to calling out African descendants a color ["black"].   But white liberals in America continue to brag to the world about their ability to build a multicultural society, yet they still can’t get past color coding African descendants that resides in America.   Why have white liberals in America not been able to shake off their primitive concept of identifying African humans as a color ["black"]?

Everything in obama's society [2008-2016] has been about race and the color of certain people's skin.    The notes you're about to review will expose or lift out the inane and perfidious racial social engineering designed and implemented by the elite white liberal establishment of America's Democrat Party.   Race, race, race,race and race is all you hear in the white liberal media networks prime time editions.   It is sad to know that America was once the most prosperous nation on earth until 2014 when China was officially recognized by the world as the top economy on earth.   This prestigious title [top world economy] in which the United States of America has held for decades has now been relinquished under the barack hussein obama administration.   Instead of America having a leader that's dedicated to national productivity and national prosperity for America, the 2008 affirmative action elected community organizer chose to distract the nation by instigating attention to race, race, race, race and more unwarranted local race related obscurities into the national theater.   This is so sad for America.


If you don't remember anything from these notes at least remember this; for many years the word "race" was freely and uncritically used by anthropologists in good faith.   The word race has been open to include the perimeters of psychological and social qualities, but inadvertently have been confused with nationality.    Now here's the treacherous underlining truth of why white liberals continue to use race implementations into our daily society of media outlets.   White liberals and the Democrat Party in America craftily make alliances of propagandizing through subtle informative ideas of inherent superiority or inferiority by using the word race in their daily dialogue; this is to give white liberals a psychological advantage over the common masses.   This can easily be detected in any white liberal's dialogue on social ethics, education recognition or race identification inquiries.   America is a Republic and not a Democracy; read my notes on  THE DIFFERENCE between a REPUBLIC and a DEMOCRACY
http://bit.ly/1p2H4xF

Therefore we must now make clearly known to an American society that's been socially engineered under liberalism that the proper use of the word race means a certain combination of heritable physical traits, without any implication of social status or psychological attributes.   Unfortunately white liberals have twisted the term and word race into a diabolical connotation to benefit liberalism in America [blacks have fallen for this year after year].

As white liberals in America brag about their superior education and superior intelligence over the global community they’re yet strapped with racist mental implants inherited from their parents of pre and post civil war Democrats [Democrat Party].   As we all know, the history of the Democrat Party in America belongs to the most racist group of humans in American history [Democrat Party and KKK are historically synonymous].   Such a racist mentality of white liberals have been solely embedded from post civil war and also the 1950's civil rights era.   The success today of the modern liberal movement is credited through partisan alignment of the Democrat Party.   America's new dynamic duo of white liberals and their modern day "house negros" have propagated despise and hate for AfriGen Conservatives, EuroGen Conservatives and Biblical Christians.

Media Controlled Racism
As white liberals control all major media outlets and network platforms they have the power to control the masses [low income population, illegal alien population, public school population] through their monopoly hold on national network media.   During the past fifty years white liberals have mastered the art of broadcasting race baiting, political correct lies and false propaganda via government media support [PBS, NPR, MSNBC, etc….].   Fortunately in our case study today we're able to see clearly through America's white liberal media monitoring and controlling America's progress [liberal progressive agenda].  Unfortunately white liberal networks have not only defaulted in helping America to overcome racial barriers, but have enforced racial barriers.   They have not used their power of communication to abolish color coding in America.   What we have today in America is white liberal media profusions of color coding, being feed to the masses by designed social racial engineering.    If white liberals of today who control the government and the national media networks really wanted to halt the lamenting of racism and color coding in America they could have easily done so.   Instead white liberals routinely produce perpetual social race engineering of blacks [special note; blacks are not AfriGen descendants, see my commentary on AFRIGEN NATION] bit.ly/1wXkuK2 .   White liberals keep racial overtones intact to control the mind of blacks along with third world illegal aliens that are systematically replacing blacks..

Subservient Citizens
Controlling loyal subjects is nothing new to civilizations around the world.   The Democrat Party in America has mastered this element of social race engineering through welfare entitlement programs.  These welfare entitlement programs are designed to keep their loyal welfare subjects addicted to government handouts.   Such social engineering keep low wage and high wage Democrat voters subservient to programmed lies and propaganda produced by the Democrat Party.    In actuality everyone [liberals, conservatives, republicans, democrats, independents] is being forced to accept racially driven overtones instigated by the Democrat Party [engineered by liberals].

Over the past fifty years liberals and the Democrat Party have had a plethora of opportunities to change the racial tone of America’s culture and yet haven’t.   TODAY we at ACB NEWSPAPER are about to end this liberal retarded race color coding with the introduction of properly identifying America's various ethnic groups [emphases heavily on African descendants] by their genetic composite.   Just think of having no more “black,” white, red, yellow or brown colors to identify Americans anymore. If America is to prove to the world that it has grown up in the last 238 years we must discard forced color coding sponsored by white liberals and the Democrat Party.

In order for the United States of America to discharge its liberal racist attitude engrained from the pre and post civil war era of Democrat Party forefathers, liberals must be properly retrained in anthropology.  Therefore as editor of ACB NEWSPAPER I will no longer grant race coloring in our editorials or commentaries. Instead we will use the proper ethnic classification format to acknowledge the various descendants of the world who live in America.

AMERICAN GENETICS 101
For instance; Africans living in America from pre civil war time have been mixed with many other races from all over the world.   Any African descendant born in post-civil war America in all likelihood cannot claim to be pure African by no means.   Only Africans who’ve recently migrated from the continent of Africa can be biologically/genetically assessed as full blooded Africans [94% of the time].   Therefore African descendants born post civil war can only have parents of partial African blood due to their mixing of other groups that have settled in America along with America's native Indians.    It is of a certainty that the majority of Africans born in America since the Civil War can only be identified as AfriGens.   This means they are of African genes and European genes, or African and Indian genes, or Italian and African genes, or German and African genes, etc……

A lesson can be taught to liberals and liberal national media networks [NBC CBS PBS CNN ABC MSNBC NPR along with FOX, NEWSMAX] in conforming to a higher level of recognizing who Americans are.   No more calling people "black people, white people, brown people," etc…..    Unlike barack hussein obama who wanted to change America the wrong way, we now have the ability to change America back to the right path of social harmony.

Example 101  Daily News Reporting:  If news reporting is identifying a bank robber it would be respectful and proper to adhere to that person’s genetic composition instead of placing emphases on skin color [which normally only pertains to blacks, but there are abnormal exceptions from time to time].   Example 101 would be, under the old liberal racial color coding of people, a bank robber would be identified as a white female; but today we convert to America's new "reconstructed citizen identification" format constructed and implemented by ACB NEWSPAPER.   This entails using simple genetic identification to assess a bank robber properly, by identifying the bank robber as a EuroGen female.  Another Example 101 Daily News Reporting: Under the old liberal racist color coding of people we have  a situation of a loving charity donor being identified as a "black" millionaire by white liberal media.   But, under America’s new "reconstructed citizen identification" format constructed and implemented by ACB NEWSPAPER the charitable donor person would be identified as an AfriGen millionaire.

It has taken 238 years for America to grow up and develop its own genetic pool of human contributors to the world.   Therefore it’s time to show the world that America has advanced far beyond the white liberal’s imaginary utopia which uses racist color coding of citizens.   America's NEW YEAR'S RESOLUTION will be to help every American understand their American genetic make up.   ACB NEWSPAPER has reconstructed the genetic forecast for Americans to use in the United States of America.   The only way to break the race color barriers currently being reenforced by white liberals we must dismantle it piece by piece.   In doing we give people proper respect for who they are.   Hopefully we can teach white liberals to stop calling African descendants blacks.   ACB NEWSPAPER is proud to present America with a much needed social tool to deflate the racism balloon of social destruction floated by race-baiters [Sharpton, Jackson, elite white liberals, etc.....    The way to defeat racism in America is stop white liberal national networks from forcing America to dwell and think about everyday.  But the sure way of defeating racism and race baiting dogs is to change America's way of thinking about race.   This can and will be accomplished by changing America's citizenry profile.    Here is a sample listing of American Genetic profiles reconstruted: