The Colored Voting Pawn
Today America must understand that blacks of today are nothing more than a colored voting pawn assigned by white liberals and the socialist/communist/muslim movement in America.  It’s almost impossible for “Real Americans” to celebrate the cornerstone of America created by Dr. Martin Luther King Jr. due to debasing of his foundational truth by rioting black anarchist and white anarchist [lawless black and white activist].   Recent actions of blacks during the years 2008-2016 have proven that blacks have no inclination of peaceful protesting, and definitely no comprehension of judging a person by their character and not their color.

In 2008 and 2012 blacks in America were completely fooled into thinking they had finally found their “King.”  What blacks had long forgotten was America had already received the best king it could possibly have; Dr. Martin Luther King Jr.  – To the shame of blacks in 2008, 2012 and today in America, Dr. Martin Luther King Jr. and his peers did not sacrifice their life for the current detestable lying black activist of today [Ferguson, Baltimore and other fake black/white liberal social activist movement].  Black and white socialists of today are nothing more than pathetic buffoons trying to regurgitate the 1960’s civil rights movement.  Black modern day liberal socialist/activists are keenly ignorant of Dr. Martin Luther King Jr. and his peers placing the final cornerstone of America’s civil rights in the building of America’s great society.

The liberal network media has trained America’s current young generation to use the color black to identify descendants of Africa.  In addition the liberal network media has been training America for the past sixty years to judge a person’s skin color as the determining factor of their worth.    As of 2018 there should not be any color coding to identify Americans, but it still remains [read AFRIGEN NATION bit.ly/1wXkuK2  and AMERICAN GENETICS bit.ly/1GFdANH]. 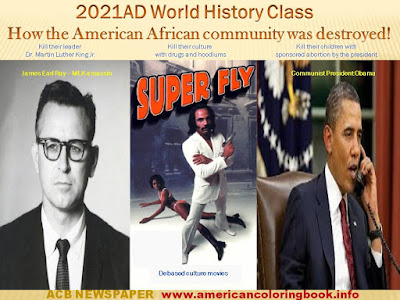 As most Americans with common sense and research information know, current Democrat party leaders along with America’s post dated first muslim leader are culprits reinforcing the social anarchy movements that produce riots and incite violence.  The devastating fact of Democrat party leaders supporting anarchist activity is well documented.  Democrat party leaders are actually PAYING anarchist to march and entice other social movement participants to INCITE riot activity for liberal network news coverage [pure social encoding].   Can you imagine being PAID to loot, burn, and intimidate others with social unrest?  Well you don’t have to imagine this, its truth.

The question is how can “Real Americans” join in and celebrate the legendary American Social Engineering Builder Dr. Martin Luther King Jr. with anarchist, rioters, thugs, hoodlums and national liberal media networks that promote the color black?   The work of Dr. Martin Luther King Jr. was completed a long time ago.  Over the past sixty years America has been adjusting and calibrating its society to Dr. King’s social teaching of judging a person by the content of their character and not the color of their skin.   Unfortunately blacks have failed to calibrate what Dr. Martin Luther King Jr. taught.  Full proof of blacks inability to assess Dr. King’s Dream was clearly established when blacks voted for the skin color of a presidential candidate for 2008 and 2012.

It is disgusting to see blacks call for celebrating Dr. Martin Luther King Jr. when blacks themselves don’t adhere to Dr. King’s cornerstone of “judging the content of ones character and not the color of ones skin.” Instead blacks today are screaming “racism-racism” at every turn of social events in America.  It would be the scent of foul excrement for Dr. Martin Luther King Jr. to smell if he were alive today to see groups like “black lives matter, the new black panther party, planned parenthood groups, la raza and homosexual-lgbt groups” holding America hostage and claiming the 1960 civil rights movement as their foundation of justification.

The King’s Cornerstone
Dr. Martin Luther King Jr. completed the social engineering building of America with the placement of his cornerstone in the foundation of America’s towering society.  Unfortunately blacks in America today [2018] have jolted Dr. Martin Luther King Jr. cornerstone from its place by instituting and carrying out political race baiting, crying out Conservatives are racist in America, carrying out political social race riots and manufacturing fake civil rights movements [Dr. King has already finalized the civil rights movement].  Most importantly the jolting of Dr. King’s cornerstone from America’s foundation by blacks have only increased blacks to be submissive slaves to the identification of being called a color and not a people.  Blacks in America today have failed to realize or comprehend that Dr. Martin Luther King Jr. was not black, he was a proud AfriGen.
read AFRIGEN NATION bit.ly/1wXkuK2 and AMERICAN GENETICS bit.ly/1GFdANH